Hovertext:
The original version of this was accidentally pretty substantially offensive given some current events. So… thanks for catching that patreons! The United States has never had a single “official” language. While English is broadly accepted accepted as the common tongue and typically used in schooling as well as government documents, it doesn’t necessarily have to be that way. Spanish is also used frequently across the country — but there are a lot more languages than that at play throughout the States.

Andy Kiersz and Ivan De Luce at Business Insider crunched some data based on the individual-level responses from the 2017 American Community Survey  assembled and published by the Minnesota Population Center’s Integrated Public Use Microdata Series program, to find out what other languages are most commonly used in the United States.

America as a multilingual nation: “This map shows the most commonly spoken language in every US state, excluding English and Spanish”, by Andy Kiersz and Ivan De Luce, Business Insider (1/18/20): (NOTE:  I will refer to languages other than English and… https://t.co/VkvPxbYqiC pic.twitter.com/aHYI6QpfLH

There are a lot of thought-provoking takeaways from the data as presented here. Some things may seem obvious — there’s a lot of French, of course, particularly in Louisiana and the states that border eastern Canada. While I didn’t know that Tagalog was as popular in California and Nevada until now, I can’t say I’m surprised. The abundance of Haitian Creole in Florida makes sense, too, but its presence in Delaware is much more interesting. As someone with an interest in indigenous tongues after colonization, it’s somewhat comforting to see that Ilocano, Aleut-Eskimo, and Dakota/Lakota/Nakota/Sioux languages are all still hanging on. And while I knew that Pennsylvania Dutch was a still thing, I genuinely didn’t realize it was still thriving that much.

What you strikes you the most on here?

This map shows the most commonly spoken language in every US state, excluding English and Spanish [Andy Kiersz and Ivan De Luce / Business Insider]

Source: A fascinating map of the most spoken languages in every US state besides English and Spanish

Hovertext:
They’re just lucky she didn’t break the bottle to use the jagged glass as an improvized weapon. The “world’s worst cat” is available for adoption, according to volunteers at the Mitchell County Animal Rescue organization in North Carolina.

The group will even waive adoption fees, it said on Facebook, because Perdita is just such an an asshole cat.

“We thought she was sick. Turns out she’s just a jerk.”

Her rescue profile says her dislikes include “dogs, children, the Dixie Chicks, Disney movies, Christmas and last but NOT least … HUGS.”

The cat enjoys lurking, faking being sick, and “staring into your soul until you feel as if you may never be cheerful again …”

Via the Associated Press:

Shelter Director Amber Lowery says 4-year-old Perdita came to the facility on Christmas Eve, The Charlotte Observer reported. Since then, the shelter has had to warn visitors that Perdita’s attempts to draw passersby to her cage are actually a ruse that will not end well.

“I’m looking at her right now, and she’s rolling around in her little bed, looking all sweet and cute, but the minute you try to rub her, she slaps you. We thought she was in pain and took her to the vet and he said: ‘No, this cat is just a jerk’,” Lowery told the newspaper. 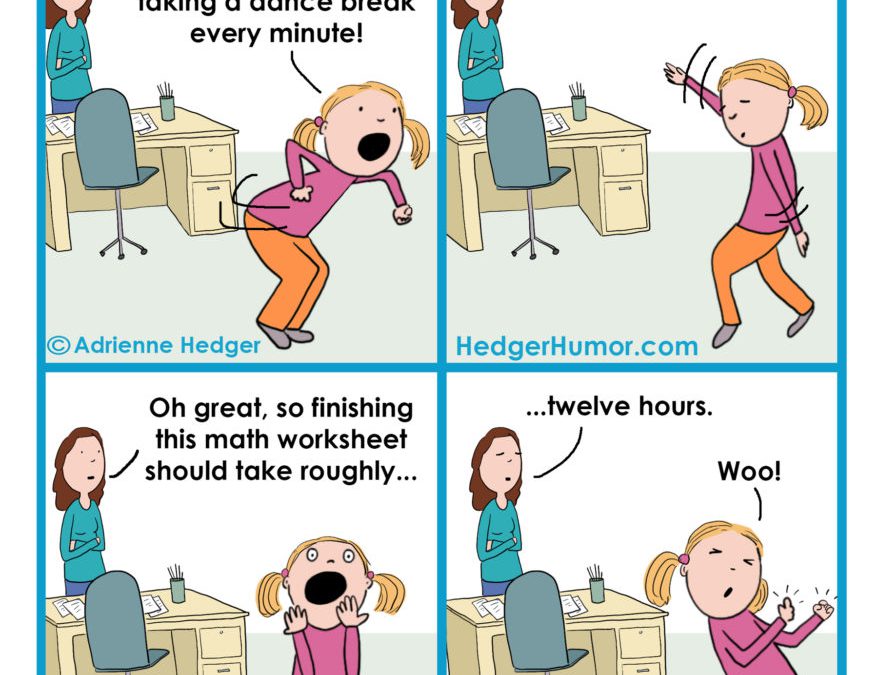 Conversation I had with Claire a couple years ago.

At least she was getting exercise… YouTuber and dad Matt MacMillan picked an unusual way to cover AC/DC’s “Thunderstruck.” He spent a year recording his baby son’s cooing, sneezing, and other random noises and pieced it together to make the song. He writes, “It took forever.”

And when you see HOW he arranged it all, you’ll see why it took so long — it’s really quite a feat!

If you’re not familiar with the original song (I wasn’t), here it is for comparison:

For when you have no fucks to give, give (these surprisingly well executed) Zero Fucks Given coins.

This crazy world is filled with dumb-asses and assholes, and we believe we are greatly outnumbered by them, so we invented/created Zero Fucks Coins as a way to arm the citizens of earth with a way offend and defend themselves from these jackasses. If a picture is worth 1,000 words, then handing out one of these coins is surely worth zero fucks.

Source: Literally give zero fucks with these coins

Hovertext:
This is basically an amalgam of Gaskill, Montgomery, and Austen, but with honest emotional states.