I love how watching one YouTube video you happen upon can scoop up a whole genre of videos you didn’t even know existed. Witness the match chain reaction genre. I watched the first video below and that lead to countless others.

I cannot imagine the patience (not to mention the desire) required to cut and glue together thousands of wooden matches. And is the time invested in building the structure proportional to the rush the builder gets during the burn?

Every year in Japan, animals escape from zoos in a planned exercise. Except they aren’t really animals, they’re humans in animal costumes. And they aren’t really escaping, they’re part of an annual drill to train staff on what to do when a real animal does. While funny to watch, escaped animals are no joke in a country known for earthquakes.

‘In the event of a big earthquake, a tree could fall on a cage, or many other things could occur that may lead to an animal escape.

‘We think it is very important, and it is our responsibility to carry it out with seriousness.’

Look for the real lions, their reactions to the drill are priceless.

screenshot via The Guardian

As a teenager, Mark Holmgren of Edmonton, Canada lost all use of his arm after a motorcycle accident. Last year, he decided to have the nonfunctional arm amputated. But he also had a curious request of his physicians: Holmgren wanted to keep the lost limb.

“I carried it out of the hospital in a garbage bag,” Holmgren told CTV News Edmonton. “I actually kept it in my freezer for about a month.”

Apparently it wasn’t easy to find a taxidermist willing to remove the flesh and prepare the bones for display.

“A couple of them told me no, like right away. There was no way that they were going to touch human body parts.”

Eventually, he found a taxidermy shop willing to do the job.

“I’m just going to keep it probably behind the sink in the kitchen,” Holmgren says. “I’m happy I did it. It’s just not for everybody.”

More: “This Edmonton man had his arm amputated. Then he kept the bones.” (CTV News Edmonton)

Source: Man keeps bones of his amputated arm on display

In the 1970s, the Soviets managed to intercept top secret communications in the US embassy in Moscow and nobody could figure out how. While an antenna was eventually found hidden in the embassy’s chimney, it took years to determine how what data was being collected for transmission and how. As a last resort, all equipment at the embassy was shipped back to the US for analysis. From IEEE Spectrum:

After tens of thousands of fruitless X-rays, a technician noticed a small coil of wire inside the on/off switch of an IBM Selectric typewriter. (NSA engineer Charles) Gandy believed that this coil was acting as a step-down transformer to supply lower-voltage power to something within the typewriter. Eventually he uncovered a series of modifications that had been concealed so expertly that they had previously defied detection.

A solid aluminum bar, part of the structural support of the typewriter, had been replaced with one that looked identical but was hollow. Inside the cavity was a circuit board and six magnetometers. The magnetometers sensed movements of tiny magnets that had been embedded in the transposers that moved the typing “golf ball” into position for striking a given letter.

Other components of the typewriters, such as springs and screws, had been repurposed to deliver power to the hidden circuits and to act as antennas. Keystroke information was stored and sent in encrypted burst transmissions that hopped across multiple frequencies.

For more on this fascinating story, check out former intelligence officer and technologist Eric Haseltine’s new book: “The Spy in Moscow Station”

Source: Ingenious Cold War keylogger the Russians used to bug Selectric typewriters in the US embassy

Wanda Diaz Merced is an astronomer at the International Astronomical Union (IAU) Office for Astronomy Outreach in Mitaka, Japan. Diaz Merced is blind and uses a technique to transform data from astronomical surveys into sounds for analysis. Over at Nature, Elizabeth Gibney interviewed Merced about how “converting astronomical data into sound could bring discoveries that conventional techniques miss.” From Nature:

How did you begin your work with sonification?

Sonification has been around for a long time. In 1933, for example, US physicist Karl Jansky reported detecting the first radio waves from space, as an audible hiss in his antenna. But at some point, visualization came to dominate the way we interpret astrophysical data. When I was an intern at NASA in 2005, my mentor, Robert Candey, wanted me to create a prototype data analysis tool that would familiarize blind people with space-physics data. So we developed software that could map astronomical data into sound — its pitch, rhythm and volume. Then, in my 2013 PhD dissertation at the University of Glasgow, UK, I proved that it is useful….

Can you describe a real-world example?

There are many. Sonification can help us to study the habitability of an exoplanet, by understanding how much high-energy cosmic and solar rays interact with its magnetic field or atmosphere. Such interactions cause fluctuations of electromagnetic emission from that star system that vary in a way that relates to frequency . BBut because astronomers usually separate out different frequency components into many graphs, this is easy to miss. With sonification, we can listen to all the different frequencies together and pick out the signal from the noise.

Source: Wanda Diaz Merced is a blind astronomer who hears the science of the stars

Many pizza places offer special “deals” if you order two medium pies. You might think that two mediums deliver more cheesy goodness than one large pie, but usually you’d be mistaken. From Primer, a mathematical comparison of two 12″ pizzas and one 18″ pizza:

And as we know, more pizza is always better.

Source: Why you should almost always order one large pizza instead of two mediums 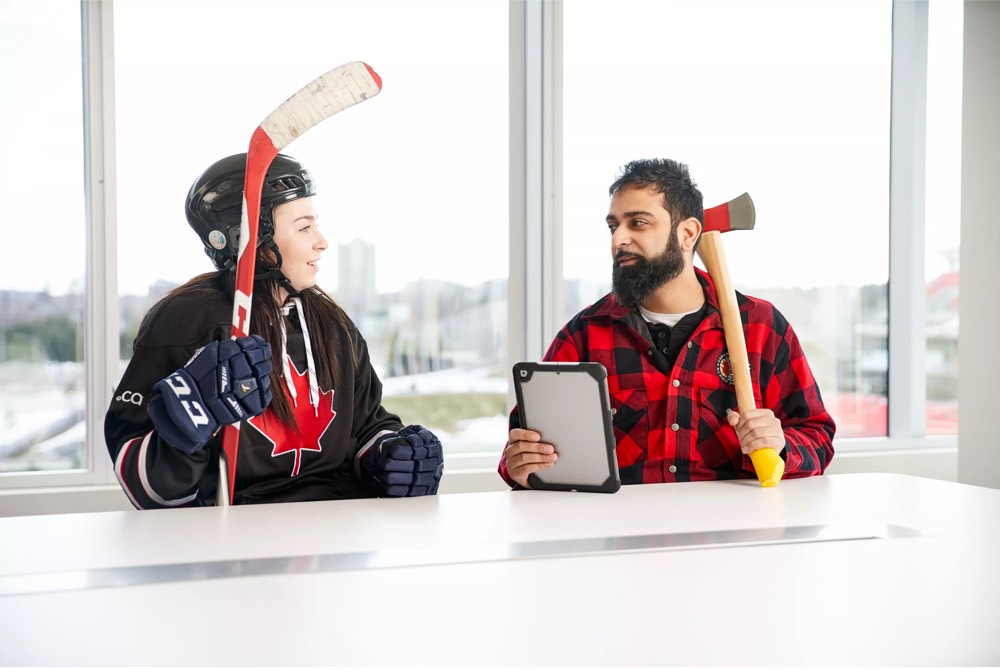 Cira, the organization that manages the .ca top-level domain, is offering a free stock photo library featuring typically Canadian scenes, like “lumberjack and hockey player discuss quarterly numbers” (above). They also have their version of the distracted boyfriend photo (“hockey player checks out lumberjack while woman in Canadian tuxedo looks on in disbelief”): as well as “backpackers enjoy poutine”: Bradley Slums describes himself as an “inter-dimensional freeriding BASE jumper.” After watching this video, you’ll understand why.

Source: Just when you think this dune-riding motorcycle rider is a goner…

For years we’ve had silverfish darting around our guest bathroom floor. I bought some silverfish traps (little cardboard boxes with sticky goo to ensnare them) and they helped, but didn’t stop them. In 2017 I read that lavender oil is a good silverfish repellent. It’s only

$7.99 for a small bottle on Amazon, so I decided to give it a try. I wetted the end of a Q-Tip with the oil and ran it around the perimeter of the bathroom floor, adding a little extra to a seam between the floor and the wall. It smelled nice and did not see a single silverfish for two weeks. I finally saw one, reapplied lavender oil on the perimeter of the floor, and it keep the little bastards aways for an even longer time. Now I hardly ever see them, and treat the floor every few months.

Source: Getting rid of silverfish with lavender oil